Crude Oil prices rose by close to 2 % to a six-week high on Wednesday after the EIA weekly report showed a reduction in inventories of Crude, Gasoline and Distillates. Brent settled up 86 cents, or 1.8 percent, at $49.70, while WTI settled up 72 cents, or 1.6 percent, at $47.12. This is now the highest close for both contracts since June 6 earlier this year. 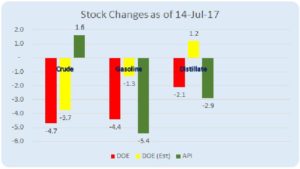 Naphtha cracks have eased slightly but are expected to stay supported since the current weak spot prices will limit the number of cargoes moving from the West, including Europe and the Med, to Asia. The volumes placed on provisional booking for August arrival in Asia is estimated at about 1.3 million tonnes.

The sizeable drawdown in Gasoline inventories as reported by EIA yesterday has helped strengthen cracks. However, gasoline stored in tanker ships off the coast of West Africa continue to remain high. The amount of gasoline on ships outside the ports of Lagos and Lome climbed as high as 1.07 million tonnes in the week to July 7, before dropping back to 950,000 tonnes last week.

Distillate cracks too managed to climb on the back of inventory drawdown in the US and firm demand for prompt cargoes. However, further upside is expected to be limited as some refineries return from maintenance and supply comes in from India and Europe.

Fuel oil cracks continue to improve as traders expect the amount of fuel oil coming to Singapore from the West and the Middle East to be below-average in July. Total fuel oil flows into East Asia for July are estimated at just over 5 million tonnes.