Oil prices took a beating on Friday as the market braced for higher global supplies. Brent crude  futures settled $ 3.30 lower than Thursday’s close (Friday being a holiday in Singapore). The loss on Friday itself was $ 2.50 /bbl. WTI futures gave up $ 1.58 over the last two days to settle at $ 65.06 /bbl. As a matter of fact it had gained 25 cents on Thursday as the WTI Brent spread came in dramatically.

Brent crude lost around 4% in the week. WTI lost about 1% for the week, its fourth straight weekly decline.

Oil ministers from OPEC, Russia and other major producing countries will meet in Vienna on Thursday and Friday to review their current production agreement. Russia has pushed for returning a million barrels per day back into the market relatively quickly. However, Saudi Arabia would like to try a lower amount to prevent the price from dropping too much, experts said. Iran, Venezuela and Iraq have all said the current production agreement should stay in place.

US drillers added one more oil rig bringing the count to 863. 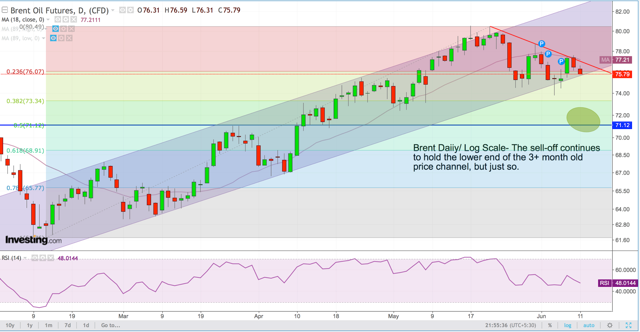 Technically, both the daily and the weekly charts have moved through some key support points. The daily chart has breached the 50 dma trend line, for the first time 20th March. The weekly chart has the last candle entirely below the rising channel that had held since the beginning of February. Further both candles have extremely short tails indicating a total lack of buying interest at the close. Having said the above, the Daily chart seems to be at the support level of a longer term rising channel in the figure above.

While the daily RSI seems to be moving into oversold territory, the MACDs in both daily and weekly chart are telling slightly different stories. In the daily chart, the signal line has just moved into negative territory yesterday, a bearish signal of sorts. In the weekly chart, the signal line has just crossed lead line from above which is a bearish indicator as well. The daily RSI could be signalling a pullback which could rise up to the 50 dma at $ 75.50 area.

The price action over the last few weeks has been a little skittish, particularly on the upticks, so one would do well to watch for other cues that the downtrend is over rather than relying on just this one number alone.

Asia’s naphtha crack edged up 2 cents to $87 a tonne on Thursday, the highest since June 6, supported by firm demand. But improving supplies impacted fundamentals and spot naphtha premiums came tumbling down after hitting near four-year highs in late May.

Asia’s gasoline crack recovered to a three-session high of $6.40 a barrel after it hovered at a five-week low in the last two sessions. Falling supplies in Asia and the U.S. gave sellers a respite.

Singapore’s onshore light distillates stocks, which comprise mostly gasoline and blending components for petrol, fell 9.8 percent or 1.372 million barrels to a six-week low of 12.628 million barrels in the week to June 13. Stocks in ARA, however, rose by 51 KT to 1.1 Million tons, which is a seasonal high.

Asia’s cash premiums for physical cargoes of 10ppm gasoil dropped on Thursday amid weaker demand and as onshore middle distillate inventories in Singapore rose to their highest in eight weeks.

Cash premiums for gasoil with 10ppm sulphur content  were at 14 cents a barrel to Singapore quotes, down from 18 cents on Wednesday.

Gasoil exports from China and India would remain pivotal for wider Asian markets over the next couple of months, especially as regional refiners start ramping up output upon completion of seasonal turnarounds. China’s oil refinery throughput rose 8.2 percent in May from a year earlier, but was off April’s highs as state-run plants began regular maintenance and some independents cut output ahead of a regional summit in a bid to reduce industrial pollution.  Meanwhile, India’s export data for May is due by next week. The country’s domestic sales for diesel have risen to record highs last month.

Singapore’s onshore middle distillates stocks rose about 17 percent in the week to June 13 to 9 million barrels, the highest in two months. Gasoil stocks in ARA too rose by 24 KT to 2.09 million tons. Having said that, stocks in both locations are at seasonal lows along with Distillate stocks in the US. Hence this commodity needs careful watching.

Also, potentially weaker demand from Pakistan may have weighed on the fuel oil crack amid signs that its state-owned oil company, PSO, might not award a tender to import up to 195,000 tonnes of fuel oil due for delivery in the last decade of June as a result of lower utility demand there.

The front-month 180-cst fuel oil crack to Brent crude widened its discount to $6.43 a barrel on Thursday, down 48 cents a barrel from the previous session and its widest since May 29.

Singapore, the world’s top fuel oil storage and trading hub, flipped to net exporter of the fuel in the week ended June 13 for the first time in at least five years, despite rising onshore fuel oil inventories in the city-state, official data showed.  Weekly onshore Fuel Oil stocks rose by 578,000 barrels to  20.113 million barrels in the week ended June 13, data from International Enterprise (IE) Singapore showed on Thursday.  Singapore, typically a net importer of fuel oil, recorded 12,000 tonnes of fuel oil net exports in the week to June 13 for the first time since at least June 2013, Reuters calculations based on official data showed.  Stocks in ARA rose by 340 KT to 1.48 million tons, which is not only a seasonal high, but a level not seen since September last year.

Fuel Oil cracks seem to have become extremely strong today but that could be a function of the huge drop in crude prices.