While the DOE did report a huge stock draw of  close to 9 million barrels in its weekly report, it also reported small product builds. A a result, the draw did not seem to enthuse traders into buying the market as hoped.

The DOE, in its report yesterday, said that crude stocks had fallen by 8.9 million barrels. Gasoline stocks were almost unchanged (+22 KB) and distillate stocks built by 700 kb. 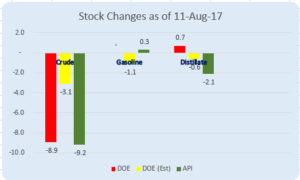 The crude draw is definitely bullish, while the product builds were, at best, minorly bearish in terms of quantity. Nevertheless, the market chose to ignore the bullish draw and finished lower.  Let us take a look at some of the possible reasons for the same.

The first bearish indicator that the market may have chosen to look at is the increase in US crude oil production by over 80 kbd to 9.50 mb/d. This is the first significant upward move after close to 4 weeks of stagnation. Secondly, while crude stocks drew overall, they continued to build in Cushing which is the primary point of supply. This would suggest that crude stocks are not being lifted as fast as they are being delivered.

On the products side, in addition to the small build in products, it may be noted that such build took place after a huge rise of close to 1.1 mb/d in product exports. The simple implication is that huge draw in crude is merely to supply external consumers and as such, the US has more than enough crude to meet all its requirements. Local gasoline demand fell back to 9.6 mb/d which may be a signal that the driving season is coming to an end. Gasoline stocks are close to 2016 levels which were the highest ever for this time of the year. Distillate demand too dropped to 4.2 mb/d. 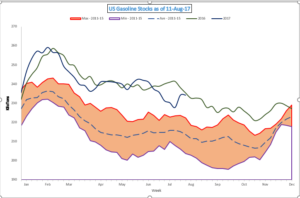 The Naphtha crack eased a little in the physical market yesterday, but demand continued to be strong. As of date, Asian refiners are reported to have purchased over 630 KT of naphtha for September delivery. The paper cracks are marginally stronger.

The prompt Gasoline crack made fresh highs today to settle at $ 13.10 /bbl. on firm demand and tight supplies.

Stocks in Fujairah were at a five week low of around 6.4 million barrels.

Paper crack values are marginally strong @ 14.45/bbl and $ 12.85 / bbl for August and September respectively. We would recommend hedging gasoline for September above $ 13.00 /bbl.

Gasoil cracks continued to ease as refineries showed signs of returning from turnarounds and supplies improved.

Fuel Oil prices continued to grow in strength with the only apparent reason being the drop in crude prices. Stocks in Fujairah were at a 4 week high of 12.06 million barrels.