The market however seemed to take heart from the fact that the build reported by the DOE was much lower than that reported by API and settled around 37 cents higher from where prices were at the time of publication.

The DOE reported that crude stocks stocks had built by 1.9 million barrels. This was much lower than the 6.5 million build reported by the API. Gasoline built by 900 kb while distillates dropped by 800 kb.  All these figures were more bearish than expected as can be seen from the graphic below. 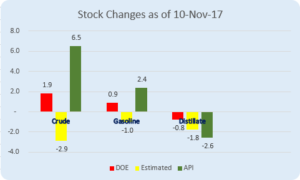 Crude production continued to rise to a new high of 9.645 million bpd and there may not be anything stopping further growth going forward.

The implied demand for both gasoline and distillates is significantly lower week on week, but marginally so year on year for distillates.

Naphtha cracks have eased further in the wake of market participants anticipating higher supplies from the West (including Europe and the Mediterranean), to arrive next month. Demand however continues to stay firm.

Distillate cracks have strengthened on the back of an aggressive buying spree by Oil Trader Winson Oil which bought a considerable 1.5 million bbls of 500ppm sulphur gasoil in the Platts Asian Trading Window. Winson Oil has and continues to be a major buyer of the fuel for most of 2017.

Fuel cracks continue to slip as traders anticipate that total fuel oil flows into East Asia for November will be close to a nine-month high of around 7 million MT. Supplies have been boosted on account of recovering Western arrivals, near record-high inflows from the Middle East and 11-month high intra-Asia volumes.