For the week, WTI gained about 8.6%, the strongest weekly percentage performance since late July of last year, while Brent saw a weekly increase of 8.2%.

This morning though, in the wake of the co-ordinated attack on Syria, oil prices are significantly lower as the impact of the same appears to be compact and over.

Over the weekend, the IEA said that OPEC could be just weeks away from “mission accomplished”. OECD stocks fell by a larger-than-expected 25.6 million bbl in February to within a 10% surplus of the five year average. In its monthly oil report, the agency also kept demand growth forecast unchanged at +1.48 mbd for 2018. Growth continues to be seen throughout all regions except OECD Asia/Oceania (-55 kb/d). Supply is expected to grow 1.79 mb/d this year, led by North America, although IEA has taken down forecasts for North America by 44 kb/d since last month’s report.

In the meanwhile, Baker Hughes, in its weekly report on active oil rigs, reported an increase of 7 rigs taking the total count to 815 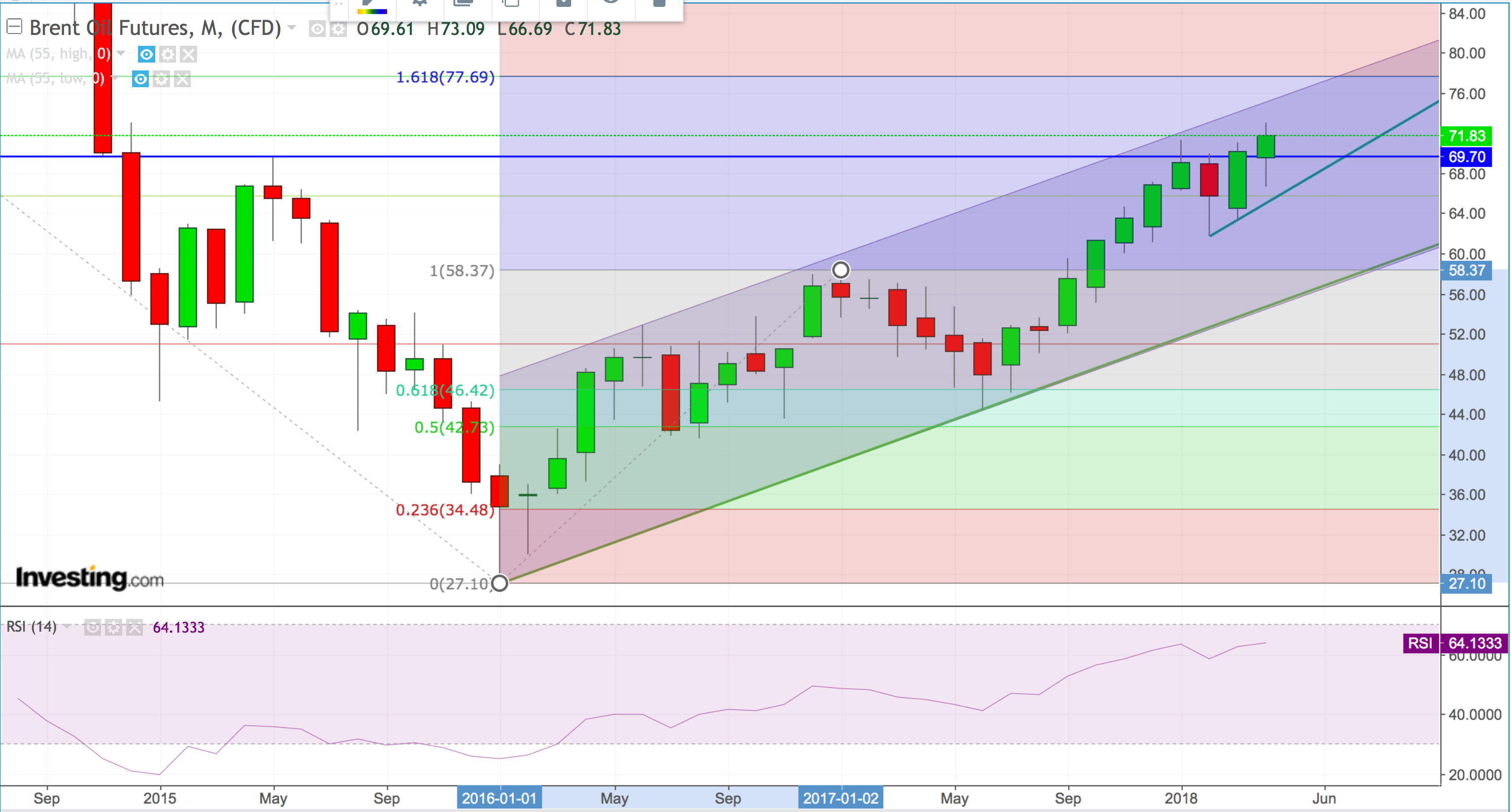 A few technical events are worth mentioning.

We see the current momentum carrying further to target the 75-76 area this month. The larger strategy remains to Buy and add on dips. We could be seeing some cooling-off with the immediate Long Term supports in the 69-70 range. (Marked by the Blue horizontal line in monthly chart marking the Dec 2014 high, that has just been overhauled.)

We should get further confirmation for Long-Term strength with a close this month above 71.28

Immediate Resistance is from last week high of 73.09/bbl. For now, unless the  long exits are stronger than expected, 71/bbl should be a good spot to Buy.

Asia’s naphtha crack recovered slightly on Friday to settle at $ 80.35  /MT. Monthly import demand in Japan for March for instance was at a two-month high of nearly 1.3 million tonnes. This was also higher versus the same period last year, official data showed.  But traders were not expecting the strong naphtha fundamentals to last as coming cracker maintenance in Taiwan and Japan would hurt demand.

Sentiment in the 380-cst fuel oil market continued to show signs of improvement on Friday with the front-month 380-cst time spread widening its backwardation, and the May crack to Brent crude holding steady despite rising crude oil prices. However, the improved 380-cst market and weaker 180-cst prices weighed on the front-month viscosity spread on Friday despite Pakistan’s PSO this week announcing it would seek to import up to 865,000 tonnes of low-viscosity fuel oil in May and June. Singapore marine fuel sales in the first quarter climbed to a record high in 2018 despite lower volumes of year-on-year March sales,

The May regrade has blown out a bit since we first entered our hedge. If it pushes past $1.50, we will hedge a bit more.