Crude oil prices rose on Wednesday after the International Energy Agency (IEA) said that a global surplus of crude was starting to shrink. Brent settled up 89 cents at $55.16 /bbl while WTI rose by $1.07 /bbl to settle at $49.30 /bbl.

Prices rose even though the DOE Weekly Report showed a big increase in U.S. crude oil inventories. Market participants largely disregarded this build as it was attributable to Hurricane Harvey. 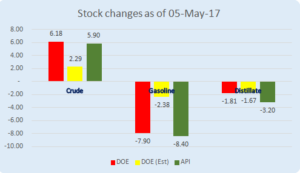 Refineries operated at 77.7% of their operable capacity last week, down from the 79.7% in the prior week. U.S. crude production on the other hand, rebounded to an average of 9.35 million bbls /day from 8.78 million bbls/day a week earlier. This expectedly caused the build in crude inventories which is likely to reduce once more refinery capacity comes back on-stream.

Although the naphtha cracks have weakened today, primarily due to strong crude prices, demand remains robust as buyers are mostly relying on naphtha due to the high prices of LPG which is the alternative feedstock.

Gasoline cracks continue to fall as supplies are slowly getting restored in the U.S. With the spike in demand caused by the devastation of Hurricane Harvey waning, gasoline cracks are losing their momentum.

Distillate cracks too have eased even as Winson oil resumed its buying in the Asian Platts window. Winson Oil purchased 450,000 bbls of gasoil yesterday, bringing its total tally to over 9 million bbls since the beginning of September. It is learnt that, three to four long-range tankers have been chartered by Winson Oil to store gasoil for a period of two to three months in Asia.

Fuel Oil cracks have managed to strengthen on the back of strong demand for bunker fuel in important trading hubs of Singapore and Fujairah.