These settles were well off the highs reached just below the release of the DOE data which, according to most analysts seemed prima facie bullish. These seem to have been offset by the increase in both US production as well as OPEC production. A statement by OPEC to the effect that the call on OPEC for supply would drop by 60 kbpd next year also seemed to undermine support for prices. 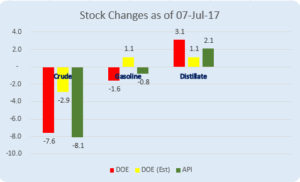 The crude draw of 7.6 million barrels was the largest draw seen in over 10 months. What is not being reported as widely is that SPR stocks also drew by 3.2 Million Barrels.

The gasoline draw, too was significant showing an increase in demand of close to 0.8% week on week and 0.3% year on year (though if we look at a 4 week average, it is down 0.5% year on year).

Having said the above, commercial crude stocks are marginally higher than at this time last year and gasoline stocks marginally lower.

The question then arises, how bullish is this for oil prices?

Crude oil stocks currently stand at 29.0 days of utilization cover. Given an estimated increase in US production and the possibilities of increasing imports as well as decreasing exports, the drop in crude stocks does not appear to be any particular cause for alarm.

Gasoline demand figures have admittedly been a bit puzzling especially when we couple it with other economic data which suggests that economic recovery is strong and should lead to increased consumption.

However, there is nothing to suggest that the US will find it difficult to source crude should it require to do so at any point in the foreseeable future.

The physical crack for naphtha dropped to significantly in the wake of high crude prices. Having said that, a lot of buyers have appeared on the scene over the past couple of days even as supplies seem ample.

Gasoline cracks are unchanged in the prompt and marginally weaker for August. The July crack has risen $ 11.70 /bbl. August is valued at $ 10.70 /bbl.

Gasoil cracks have dropped significantly with the absence of any further demand arising out of India. The advent of the monsoon has resulted in a slippage in June demand as compared to May although demand in June rose 6.5% year on year. The July gasoil crack is valued at $ 12.75 /bbl  and August around $ 11.90 /bbl.

The fuel oil market continues to be under significant selling pressure.  Cash premiums for both 180 cSt and 380 cSt cargos have dipped significantly in Singapore. In Fujairah, stocks are failing to draw as Qatari flag vessels are no longer allowed to take bunkers there. KPC issued a surprise tender to sell Fuel Oil, its first since April. Time spreads are continuing to ease out.