The initial rise at start of New York trading hours was attributed to the strong Payrolls number.  However, the enthusiasm slowly petered out during the day until the last hour reported a drop in the Baker Hughes Rig count by 1 rig to 765 last week. This was taken by traders as a signal that drilling activity is on a slowdown.  With production growth also appearing somewhat sluggish it could signal a re-balancing of stocks was now indeed in place.

While the price action for most of this week has been bullish, crude oil futures finished the week marginally lower with Brent losing about 10 cents/ bbl on the week and WTI about 15 cents/bbl.

Fundamental news appears to be a mixture of sorts with OPEC production / exports at yearly highs coupling with strong draws in both crude and product stocks in the US.  The market will therefore be tentative going forward the next few days.

The daily and weekly charts are both showing marked signs of bullishness.  The daily chart suggests that crude oil is currently in a rising channel, comfortably ensconced in the middle with the 200 DMA just below it as a support.  The weekly chart shows that crude oil has just broken out of a descending channel and is now in an ascending channel as well with the 50 week moving average just below current levels acting as support.

However, the MACD is showing some bearish divergences particularly in the daily charts. This would be echoed by other oscillators as well. Additionally, last week’s candle is what is called a ‘spinning top’ indicating uncertainty in the market. Hence caution is recommended while buying at these levels. Having said that, our bias would be to the upside at this stage technically.

The Naphtha crack in continued to improve on Friday as emergent demand appeared to soak up the excess supply. It is expected that supply from Europe next month will be lower than the current month, following the outage at Shell’s Pernis refinery.  Naphtha stocks in ARA have been dropping and are currently at a two month low of 228 KT. 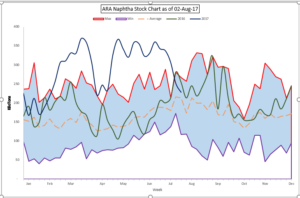 The physical Gasoline crack was marginally higher in the wake of hectic trading  in the Platts window yesterday. 9 deals were reported with a total volume of 450 KB.

Gasoil and Jet supply and demand in Singapore appears to be reasonably balanced. However, paper cracks continue to ease out.

Fuel Oil cracks in Singapore continued to stay weak even as Europe reported a draw in stocks. It is expected that some of that draw will make its way to Singapore