This morning prices are slightly lower as the market still fears the backlash of a trade war and its impact on growth in China.

Overall, the outlook on crude remains bullish if we are to go by the bets laid by the Hedge Funds. Net long position in the 6 most important oil contracts stood at 1.39 billion barrels, not much lower than the record 1.48 billion barrels set on January 23rd this year. Further, long positions outnumber short positions by a record ratio of 12.5:1. (Source : Reuters)

While the associated risk of such skewed positions is well known, it does not seem to have fazed the funds from maintaining this sort of length virtually all through this year. Their belief that there is still significant upside stems from

The biggest source of uncertainty is now on the demand side, where the macroeconomic cycle is rapidly maturing, interest rates are rising, and increasing protectionism is clouding the outlook. 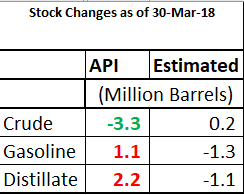 While this may have been bullish, the API also reported builds in Gasoline and Distillates where analysts had been expecting draws.

That this build in products was achieved with run rates falling 365 kb/d makes the picture even more confusing.

Markets will, as usual, be looking to the DOE for more clarity and official figures

Asia’s naphtha crack dipped by 2 cents $ 89.08 /MT. Spot premia were, nevertheless unchanged perhaps even stronger. There are reports of full range naphtha being purchased for 2nd half May delivery at a premium of $ 15-16 /MT.

Asia’s gasoline crack dropped 3 % to settle at $ 8.01/bbl on Monday. With high inventories in both Asia and Europe, CNPC reported a sale of a 35KT cargo destined for the American continent.

Asia’s jet fuel premiums climbed to the highest in over three weeks after some stronger bids on Tuesday. Cash differentials for jet fuel  rose to 90 cents a barrel to Singapore quotes, from 52 cents on Monday. Jet markets will remain well supported at least until May but beyond that when refineries start coming back from the ongoing seasonal maintenance, the aviation fuel market may take a different stance

The premium for 10ppm gasoil  fell to 39 cents a barrel to Singapore quotes, compared with Monday’s 50 cents, the highest so far this year. In the near-term gasoil would likely remain supported due to summer demand, but the market is trying to gauge whether the current stockpile of inventories, built over the last two quarters before the refinery turnarounds began, can get sufficiently drawn down.

Asia’s 180-cst fuel oil market extended gains amid concerns of narrow blendstock supplies over the coming month and ample inventories of high-viscosity fuel oil. Asia’s April viscosity spread climbed to its highest since June 2015 on Tuesday after nearly three weeks of steady gains, while cash premiums of the fuel rose to their highest in nearly six months. By contrast, ample supplies of the higher viscosity fuel weighed on 380-cst fuel oil cash premiums and time spreads.