Oil prices edged higher on Wednesday as the U.S. Energy Information Administration (EIA) released its weekly inventory data which showed drawdowns in crude, gasoline and distillates. Brent settled at $52.36 /bbl, up 58 cents while WTI settled at $49.59 /bbl, up 43 cents. 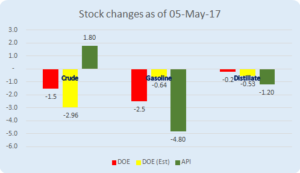 The fundamentals for the naphtha market remains strong as supplies are beginning to tighten on spot and term demand coming from South Korea, Japan and Malaysia. However cracks are lower today as an unexpected shutdown of a reformer at South Korea’s second-largest oil refinery operated by GS Caltex Corp has countered some of the impact coming from Shell’s Europe refinery outage.

Gasoline cracks have dipped marginally as traders apprehensions of a short term supply shortage in Europe due to the shutdown of the Pernis refinery was offset by Shell’s statement statement that its Pernis refinery may be back onstream by second-half of August.

The August crack is valued slightly lower at $ 12.40 /bbl today.

Distillate cracks have stayed supported as the East-West arbitrage has opened. It is now profitable to ship jet fuel cargoes from the Middle East to Europe. However, increasing freight rates may limit cargoes shipped there. For now it is heard that two parcels of jet fuel totaling 100,000 mt and loading from Qatar and Kuwait respectively have been provisionally booked for Europe.

Fuel Oil cracks have dipped on the back of high inventories, poor demand and surplus supplies. Adding to the supply glut is Jordan Petroleum Refinery, a regular importer, which is looking to instead sell 60,000 to 70,000 mt of heavy fuel oil with 3.5 % sulphur content through a tender closing on 8-Aug.