Oil prices climbed above $80 a barrel on Thursday for the first time since November 2014, before retreating on a stronger dollar and lack of fresh supportive data to Wednesday’s levels. Brent rose 2 cents to settle at $ 79.30 /bbl. West Texas Intermediate crude settled flat at $ 71.49 /bbl.

The global benchmark on Thursday broke through $80 a barrel for the first time since November 2014, and investors anticipate more gains due to supply concerns, at least in the short term. Brent, which has gained about 17.5 percent since the start of the year, rose about 1.9 percent this week. WTI rose about 0.9 percent for the week, its third straight week of gains.

Hedge funds and other money managers cut their combined futures and options position in New York and London in the week to May 15 to the lowest level in six months, the U.S. Commodity Futures Trading Commission said on Friday. The move was the fourth consecutive cut. The net long position dropped by 15,322 contracts to 419,907 during the period.

The U.S. oil rig count held steady at 844 this week after rising for six weeks in a row.

This morning, crude oil prices have risen on news that the US and China have put their trade war on hold. 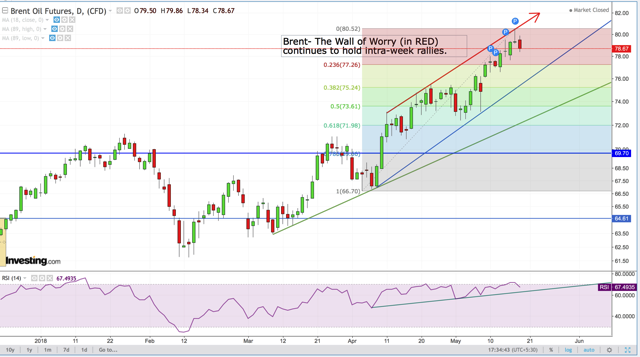 The week under review closes positive for the 6th consecutive time at 78.67/ bbl. Importantly the close is a good 2.3% off the record highs of 80.50/bbl. The is the most the closing has come off from the highs in any of the last 6 weeks.  While short term momentum continues to be strong, this is the first week in 6 where  short term selling has matched the buying.

The targets for this month in the 79-80 range are met with more than a week to go before expiry of the current contract.

Last week we had recommended for aggressive traders, that they go long to target $78-79 /bbl. This would have made such traders good money.

For the coming week, market action is likely to be two-way again. The sell off from the 80.50/bbl highs is likely to be retraced. It is also likely that new swings highs will not be held. We suggest traders keep positions light till we either confirm or deny a short-term top inside a larger up-move that is flagging.  The wall of worry is still operational, holding down weekly highs

Asia’s naphtha crack extended gains to end the week at a four-session high of $107.70 /mt due to recent strong demand and tighter supplies. The strong fundamentals kept spot premiums for Indian cargoes at high level with trades being reported at premiums of MOPAG + $ 25- 30 /MT.

Asia’s gasoline crack eased by 30 cents to $9.56 a barrel on Friday. Demand has improved in Asia, with India and Indonesia seeking cargoes but supplies were still comparatively high.

Asia’s jet fuel margins stayed at firm levels of above $16 a barrel on Friday supported by demand, but rising oil prices were a concern for airlines. Jet fuel margins have so far have performed well, averaging at about $15.55 a barrel for January to May 18 this year, higher than the same period for 2015-2017.

In the meanwhile, the gasoil trading window shows signs of resuming a ‘play’ with Winson Oil buying 4 of 5 cargoes trading in the window. At 750 KB, this was the highest volume of gasoil traded since March 12.

The June 180 cSt-Dubai crack is still hovering around -$3.50. While we had a target in mind of better than -$ 3.25 /bbl , we may just recommend a hedge should we see improvement tomorrow.